Gaucher disease is a rare panethnic lysosomal storage disorder caused by a defect in the beta-glucosidase (GBA1) gene. This leads to deficiency of the enzyme glucocerebrosidase and increased accumulation of undegraded glucocerebroside glycolipid within the lysosomes of cells. To date, about 460 mutations in the GBA1 gene have been described. Aiming to determine the mutational spectrum and molecular pathology of Gaucher disease in India, the present study investigated one hundred unrelated patients (age range: 1 day to 31 years) with splenomegaly, with or without hepatomegaly, cytopenia and bone abnormalities in some of the patients

Results
Biochemical analysis revealed a significant reduction in β-glucosidase activity in all patients. Sanger sequencing established 71 patients with a homozygous mutation and 22 patients with a compound heterozygous mutation in the GBA1 gene. The lack of identification of mutations in three patients suggests the possibility of a large deletion/duplication or deep intronic variations in the GBA1 gene. In four cases, where the proband died due to confirmed Gaucher disease, the parents were found to be carriers. Overall, the study identified 33 mutations in 100 patients that also cover four missense mutations (p.Ser136Leu, p.Leu279Val, p.Gly383Asp, p.Gly399Arg) that have not been previously reported in Gaucher disease patients. The p.Leu483Pro mutation was identified as the most common Gaucher disease mutation in the study (62% of patients). The second common mutations identified were p.Arg535Cys (7% of patients) and RecNcil (7% of patients). Another complex mutation, Complex C, was identified in a compound heterozygous state (3% of patients). Homology modeling of the new mutations suggested destabilization of the GBA protein structure due to conformational changes. 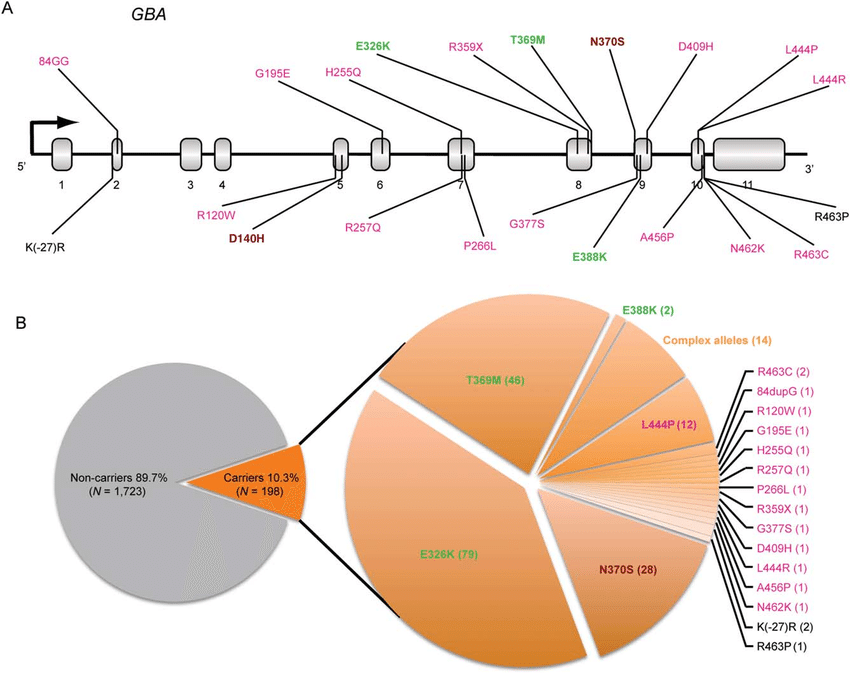 Conclusions
The study reports four new and 29 known mutations identified in the GBA1 gene in one hundred Gaucher patients. The given study establishes p.Leu483Pro as the most prevalent mutation in Indian Type 1 Gaucher disease patients providing new insight into the molecular basis of Gaucher disease in India.

Since Philippe Charles Ernest Gaucher first described the phenotypes of GD one hundred and thirty-six years ago, the eponymous "Gaucher Disease" was introduced. In 1934, a study by Aghion revealed that distorted macrophages, also called Gaucher cells, were due to an accumulation of the lipid glucocerebroside [3]. In 1965, a study by Dr. Brady and Dr. Patrick uncovered the fact that the metabolic defect in GD was due to deficiency of the enzyme β-glucocerebrosidase [4, 5]. In 1968, GD was classified as a lysosomal storage disorder as Weinreb et.al. work in a rat model established the lysosomal localization of β-glucocerebrosidase [6].

Multisystem GD has heterogeneous phenotypes, however, based on age of onset, presence/absence, and progression of neurological manifestation; GD is clinically divided into three types. Type 1 (non-neurological) GD is the most common form, while neuronopathic GD, that is, type 2 (acute neuronopathic) and type 3 (chronic neuronopathic) occurs less frequently. Neuronal involvement in DG is a gray area. However, a study by Kinghorn et al. in a Drosophila GBA1 orthologs model, showed that autophagy efflux blockade results in accumulation of glucosylceramide in the brain and age-dependent locomotor defects [7]. The most common clinical features in GD include hepatosplenomegaly, anemia, thrombocytopenia, growth retardation, seizures, and radiographic bone disease.

Loss-of-function mutations in the GBA1 gene prevent the enzyme GCase from cleaving the β-glucosyl bond of glucocerebroside, which is necessary to break down glycolipid glucocerebroside into glucose and ceramide [8]. The human GBA1 gene (